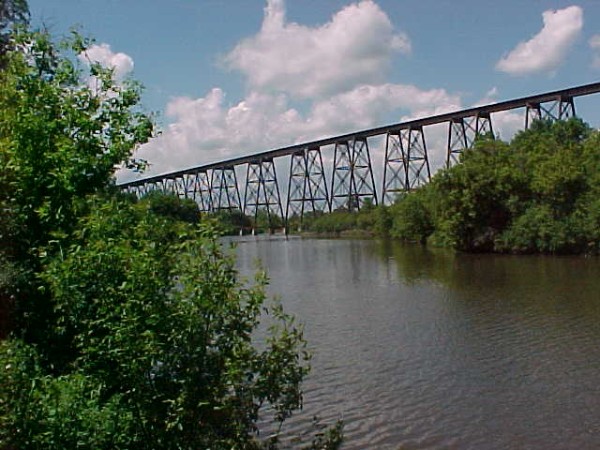 The Hi-Line Bridge spans the Sheyenne River Valley across the two northern most hills surrounding the city of Valley City. It was formerly called the viaduct by the Northern Pacific Railroad. In 1906 construction of the bridge began and the structure was not completed until 1908. The reason for building the bridge was an economic one: The expense of the large amounts of coal burned by the trains pulling cargo out of the Sheyenne River Valley.

Though the Hi-Line Bridge is no longer utilized for carrying passenger trains across the valley, it continues to play a vital role in the traffic of freight trains. It was also an indespensible tool for moving both men and supplies during both World War I and World War II.

The Hi-Line bridge is 3,096 feet long and rises 160 feet above the Sheyenne River. Approximately 6,880 tons of steel were used to build the structure. One hundred sixty men undertook the tremendous task of constructing the bridge, which cost a total of $750,000.

It has been the mascot of Valley City High School since 1926.